Cleo, a chatbot that wants to replace your banking apps, raises £2M led by LocalGlobe 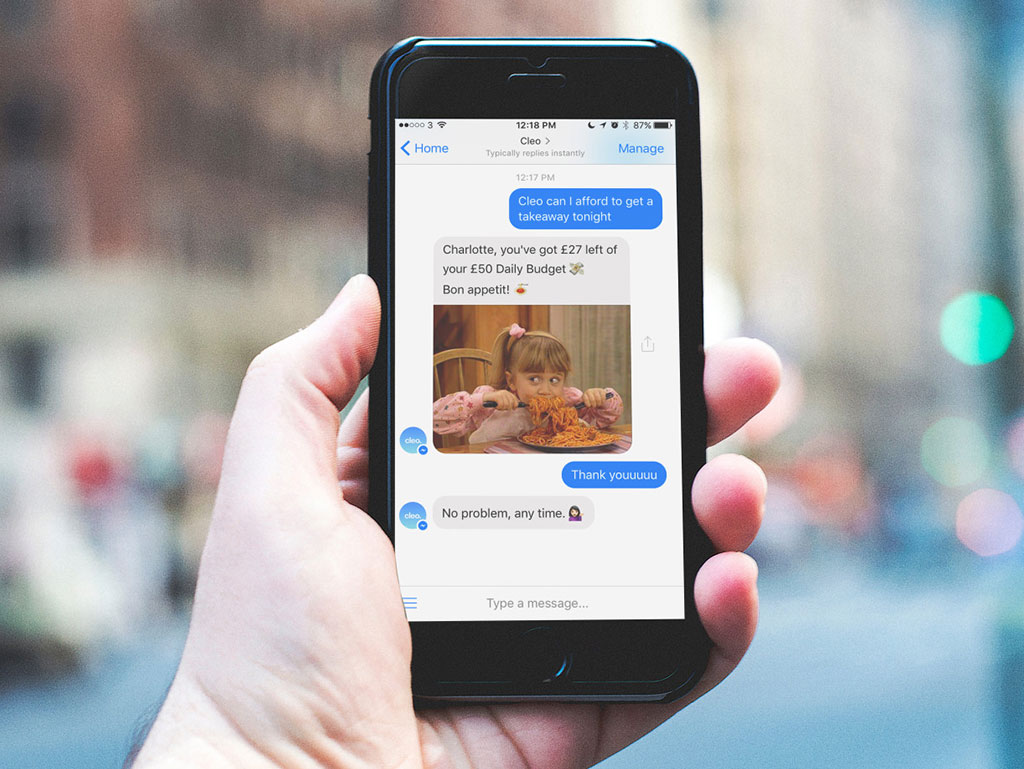 Cleo, the London-based fintech startup that offers an AI-powered chatbot to help you manage your finances, has closed £2 million in further funding, adding to an impressive list of backers that already includes Skype founder Niklas Zennström.

The new round is led by LocalGlobe, the seed VC firm founded by father and son duo Robin and Saul Klein, with participation from a number of existing investors. They include Zennström himself, Entrepreneur First (EF), and Jason Goodman, the founder of advertising agency Albion, who also becomes a non-executive director of Cleo.

Founded by Barney Hussey-Yeo and Aleksandra Wozniak, after they teamed up at company builder EF, Cleo is described as a digital financial assistant, powered by AI, that takes the form of a chatbot available via Facebook Messenger. It offers a conversational interface and, in lots of ways, is a replacement for your existing bank’s apps, enabling you to ask for insights into all of all your spending across multiple accounts and credit cards, broken down by transaction, category or merchant, once you give Cleo permission to access that data.

In the world a spew of updates since the chatbot officially launched in January, Cleo also lets you take a number of actions, including some based on the financial data it has gleaned. You can now send money to your Facebook Messenger contacts via Cleo (without sort codes or logging into your bank, and instead charged to the debit card you have linked to the app), automatically put small amounts of money aside into a savings account based on what Cleo deems you can afford, and find better deals and switch for things like utilities and various financial products, such as credit cards.

In a call with Cleo co-founder Barney Hussey-Yeo, he told me that the idea for Cleo came when he was at Wonga, the controversial payday loans company, where he previously worked in the data science team (Wonga co-founder Errol Damelin is also an investor in Cleo). This, he says, gave him a unique insight into how opaque financial services, and particularly the incumbent banks, are in the way they cross-sell products that aren’t always in the interests of customers and don’t do a good job of helping them understand and manage their spending, despite sitting on a ton of relevant data. In turn, Hussey-Yeo wanted a better way to track his own spending, noting that despite having a relatively well paid job, he too had unwittingly turned to his bank’s overdraft.

To that end, Cleo has been designed from the ground up to make your spending data work a lot harder for you. The chatbot can answer questions like your current balance, how much you have spent on, say, takeouts or travel that week, and warn you if you are running over budget for the month. You can also set spending goals and other types of alerts related to your transactions. Hussey-Yeo says this is in contrast to the passive approach banks take where simply warning you that you are heading towards an unauthorised overdraft would in aggregate cost millions in lost revenue.

However, given that financial data is the next and possibly final frontier in this current user data land grab (after search/intent and social), and in a PSD2 and Opening Banking world that is seeing regulation force banks to make customer data accessible to third-party apps, the company that can establish itself as the interface for you to manage all things money has a huge opportunity to make a lot of money too. It is therefore no surprise to hear Hussey-Yeo say that Cleo wants to be that interface.

Like a growing number of fintech startups — from fully fledged challenger banks (“nobody needs to be a bank to replace your banking app,” Hussey-Yeo argues), to other chatbot-styled financial assistants, such as Plum, Chip and Ernest, or all-your-cards-in-one app Curve — central to Cleo is a much more ambitious fintech platform play. This will see the app connect to and interface with a growing number of financial services and offer more of its own, something already evident in its recently launched savings and switching features. The company also plans to expand beyond U.K./Europe to the U.S. and Australia.

“Everyone is racing to the same goal,” says Hussey-Yeo, before describing the plethora of fintech startups trying to become the platform for users to manage their finances as partaking in an arms race. “There’s a shit ton of VC money going into the space, the best investors in the world. Everyone knows that a huge company will come out the other side, [but] it’s all to play for,” he says.

The word play, or rather, playful, might also be an apt description of Cleo itself. The chatbot has purposefully been given a rather overfamiliar personality, including being very reliant on the use of emoji and gifs, which Hussey-Yeo says the startup’s users absolutely love. He cautions me not to underestimate the importance of Cleo’s conversational style in helping the app compete purely from a user experience perspective, particularly amongst the digital natives it is targeting. (I’m told that a recent survey of around 1,000 Cleo users revealed that 77 per cent have stopped using their bank’s own app within three months, while the chatbot’s high retention rates were a big draw for investors.)

I’m also reminded that, in response to my scepticism towards the number of startups and established companies that initially jumped on the chatbot bandwagon, Hussey-Yeo once joked that I didn’t understand the potential of chatbots because, at just over the age of 40, I was too old. I doubt the millennial founder has ever used that line on 69-year-old Robin Klein, whom I understand led and championed LocalGlobe’s participation in Cleo’s latest funding round.